The Quest for the Best Babi Guling in Bali 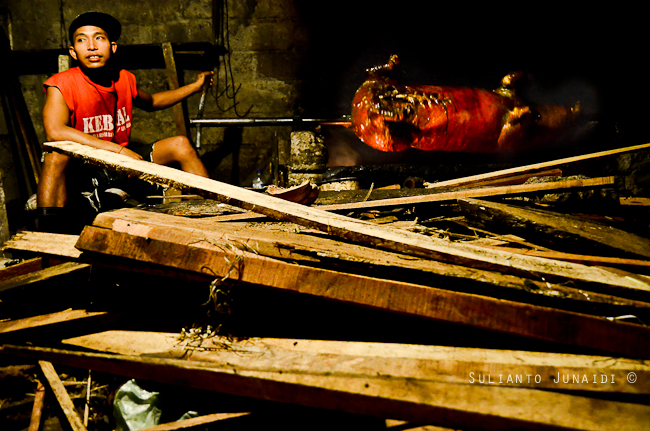 Babi Guling – The pork worth drooling over

For those that have never tried it, go out immediately and track some down – it is 100% worth it! Babi Guling (English: Suckling Pig) is a whole pig roasted over a fire and cooked to perfection. The Balinese love their Babi Guling and many ceremonies include it, not just as a food but also as an activity – the act of actually cooking it that is. The recipe for cooking Babi Guling can vary a bit here and there but generally the main recipe is pretty much the same everywhere.

Tracking down the best Babi Guling in Bali

So when you read that Ibu Oka, often claimed to be the best is not actually the best, lots of you were probably wondering where the best Babi Guling actually is. The truth is – it’s a secret. While I don’t ever discourage anyone from actually going there, the place is quite hidden, doing quite good business already and it has asked that I don’t publish their exact address.

What I can publish is some information to help you find the place if you are so inclined. Some clues:

It is a very tough place to find especially as there are many turns and it is only open late at night when everything is dark and looks the same. The best way is to just find the town of Buduk itself and go from there. At that hour almost anyone that you see on the road will have the same destination – the famous Babi Guling. Ask people on your way if they know it and chances are they will lead you right to it. If you manage to find the small road that it is on (hint – it is on the right hand side of the right on a bend in the main road) finding the warung itself should be much easier. There will be lots of bikes parked out in front of the small alleyway, an obvious sign given the remote location and quiet time of night.

What makes it the best Babi Guling in Bali?

A very good question! While I don’t doubt that the people cooking it have a great recipe, it is all about the freshness. Most warungs will cook the pig at another location and prepare everything before bringing it to the warung to sell it. This warung cooks it right there in front of you and when it is done they pick it up, cut it up and serve it to you within 5 minutes of it being pulled off the fire. If you can get there by 3:30 AM then you can see the end process of it being cooked and also be one of the first to be served. Get there too late and you will have trouble finding a seat and have to wait in line to be served – even at 4 in the morning.

Who says it’s the best Babi Guling around?

The numbers don’t lie and the people lining up are definitely proof. Some people need more convincing and that is understandable, many of my Balinese friends did as well when I told them I knew about the best Babi Guling in Bali. They didn’t believe that a foreigner knew about a better Babi Guling place than them. So I would make a bet with them – if it was the best they had ever had, they would have to pay for me. If it wasn’t the best they had ever had, I would pay for all of them. So far that has been a bet that I have never lost.

Is it really worth the long, late night drive?

In my opinion, YES! I happen to be a connoisseur of Babi Guling though. So far, everyone I have brought there – both local and foreigner – has said that they would return to this far off place in the middle of the night. None of them seem to remember how to get back though!

The mix of people that frequent this Babi Guling place is quite varied as well. About half are young Balinese (14-24), just finishing up a late night arak session and looking to fill their stomachs before going to sleep. The other half are older men that would like to get a hearty meal before heading off to work in the rice fields or other early morning jobs. Women, outside of the ones working there, are few and far between. Many come dressed in the full-on Balinese garb of kamen, saput and udeng. You can really feel that you are in a truly Balinese warung every time you go there.

I’ve had the idea before that it would be great to help this family operation set up a place closer to the tourist center and open at a normal hour so that they could become the next famous Babi Guling. After a bit more thinking though, it doesn’t really seem to be what they want. These are people that set their own hours and still have extremely high demand. They live right behind the warung itself and seem like they are very happy. Trying to commercialize it would only ruin a great thing, which is exactly why this Babi Guling will remain a secret to all but those who are truly determined to find it. 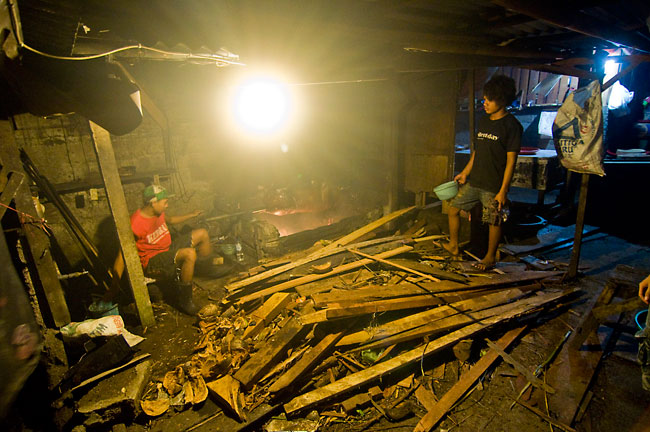 It’s far from a modern workspace but the results are incredible. 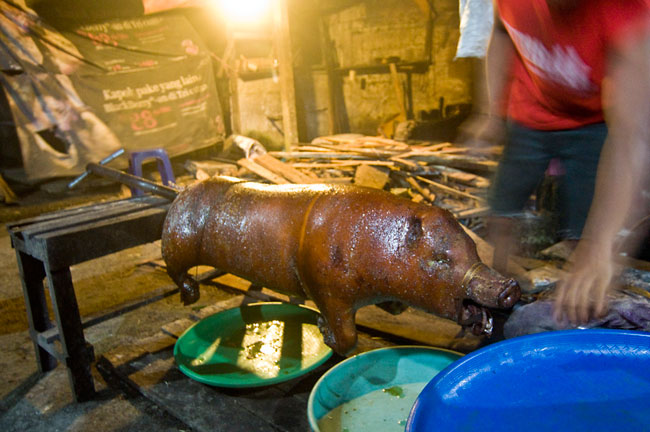 The pig, fresh off the fire and waiting to be cut up 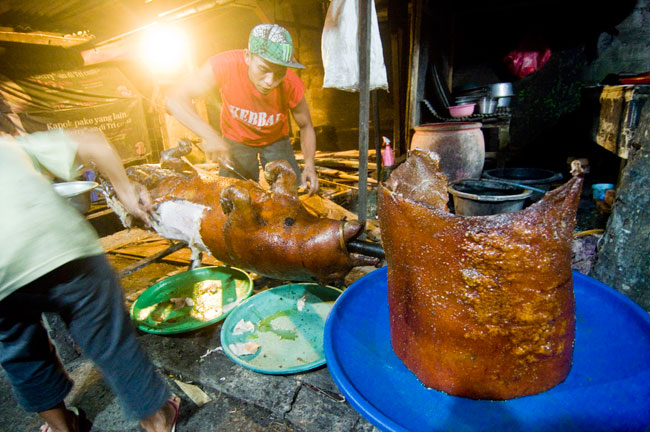 Look at that huge piece of skin they cut off! 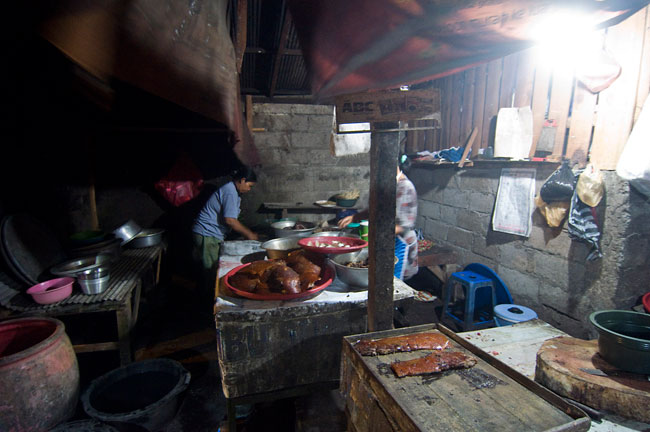 The women preparing the the side dishes in the kitchen area 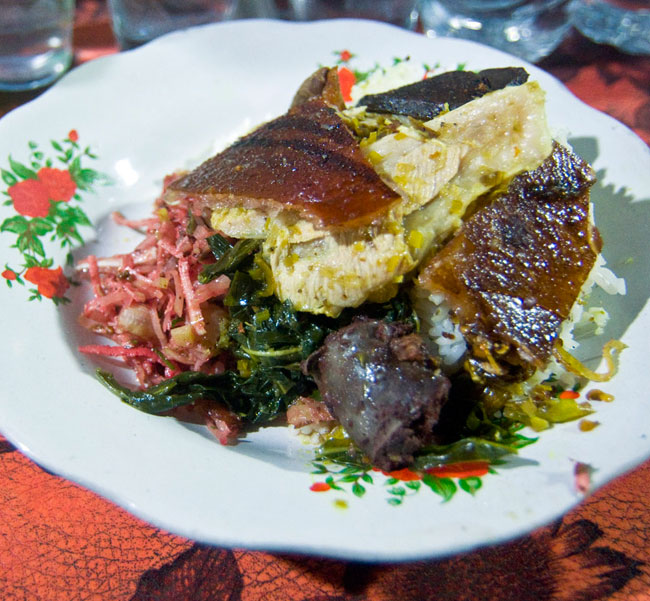