Bali rainy season is near, dreading it or excited? 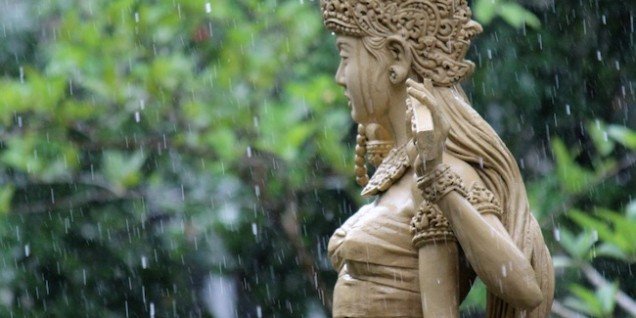 Every year in Bali, usually somewhere in the months between November and April, the Bali rainy season hits.

It is definitely not like clockwork and can fluctuate a few months in either direction or skip completely only to bring lots of rain during the months of June to August (hasn’t happened in a while), but when rainy season does hit, people take notice. Bali Rainy season is soon to be in full swing here in Bali and just like almost anything else on the island, it’s all in what you make of it.

Rainy season brings with it flooding, leaky homes and tomcats. Check our article on tomcats so you know how to avoid and treat their stings.

Those who have never been here for the rainy months before might have no idea what it is actually like. Rest assured, Bali does not suffer the types of monsoons that you get in places like Goa, India but a fair amount of rainfall does accumulate, sometimes resulting in floods.

The average day during the Bali rainy season usually sees rain at least once during the day. The most common occurrence is when the clouds open up and it seems like buckets full of water are coming down all at once. This type of heavy rain can produce flash floods in areas that have poor drainage and make the roads unsafe to drive on.

Then again, there are days where it remains overcast all day long and it rains for most of the day too. And then there are also the days when it doesn’t rain at all and we get to enjoy the entire day without any interruptions from the rain. Don’t forget about the days where the wind is especially heavy either. The heavy winds can be dangerous on their own (knocking over trees, creating dangerous road conditions) but are made especially worse when coupled with rain that seems to come down sideways.

A weather report is almost useless especially during the Bali rainy season. This means that during the rainy months, most people just sort of expect rain will be coming at some point throughout the day and plan for it accordingly. Everyone carries around a raincoat or a poncho in their motorbike during this season and those with a car would prefer to invest the additional time spent on the road in an effort to stay dry. I can’t blame them!

Should you stay for the Bali rainy season?

I know many people plan their holidays in Bali to avoid the Bali rainy season. Probably a  good move, since too much rain can make even a place like Bali seem grim in the short term. On the other hand, I also have many permanent or semi-permanent expat friends that like to get away of the Bali rainy season. Some go to Thailand, Vietnam or similar destinations to wait it out while others go back to their home countries for a little while.

While I can understand that people don’t like the rain and don’t like to get wet, the rainy season here in Bali offers a lot of other advantages that make it worth sticking around for. Some of my favorites include:

Cooler weather – Even though most parts of Bali don’t ever get truly cold, you can still enjoy some cooler weather during the rainy months. Usually things are at the hottest right before the rain comes, making all that water quite a welcome visitor. Even on the hottest days of the rainy season, an afternoon shower can work wonders to cool things down by several degrees almost instantly.

In my house, I find it hard to be out of the air-conditioned areas during the hot months. Now that it is raining frequently though, it is much more enjoyable to make use of all of the space in my house without having to retreat into the comfort of AC so often.

Lower tourist numbers – One of the most common expat complaints of Bali being overrun by tourists is partially solved due to the arrival of the Bali rainy season. A good percentage of tourists choose specifically to avoid the island when it is likely to be raining a lot, meaning there is much more breathing room to be had by locals and long-term residents alike.

The places that would usually have lines a kilometer long during regular season will have no lines at all during rainy season. Simply finding a place to set your towel down on some beaches can be a task when Bali is full, but during the rainy months, the beaches just seem so much quieter.

The same can also be said for the roads. In touristy places like Kuta, the decrease in tourist numbers means a decrease in most other related areas including traffic. If you are in a place like Denpasar which doesn’t see many tourists, the roads still tend to be a little less congested due to people not wanting to go out for fear that it will rain soon and they’ll melt.

More beautiful views – People come from the world over to see some of the magnificent views that Bali has to offer and some of the best can only be taken advantage of during the rainy season. Before the rain starts, things tend to dry out due to lack of rainfall and some of the best spots for views can be less than spectacular.

Once the rain does start falling, things come back to life again and most importantly, become green again. The hills, the rice fields, the trees — green is everywhere. While a day out view-hunting and photo-taking can easily be ruined by dark clouds above, a sunny day during the rainy season is optimal time to get out there and see some of the most amazing views in Bali.

An excuse to be productive/relax – Bali is many things for many people depending on the type of lifestyle they lead here. Some come here with a project in mind and find themselves out socializing or partying so much that they never get anything done. Others come to relax a bit and find that before they know it, other elements of life in Bali have taken over and they are just as busy as they were back home.

A bit of frequent rainfall can do wonders to get you back into the habits and schedules you want to be in. Those that want to work on their own projects will find it much easier to stay focused when it is raining out, and a lot of their social obligations end up being cancelled.

People who want to relax need only stay at home, lie back and focus on the sound of raining bouncing of their rooftop and windows. The only people who can’t enjoy a good rainstorm, are the only people that have never experienced one without the safety of warm, dry shelter.

Lightning – This is a personal favorite of mine and although not unique to the rainy season, it still happens quite frequently then too. Since moving to Indonesia, I can’t help but notice how often I am able to see lightning without the presence of either rain or thunder.

As you drive along, you will often see a bolt of lightning light up the entire night sky, with no rain or thunder to follow anywhere in sight. Then a few minutes later, another bolt, and another in a few minutes more. While I’m positive that lightning has also been responsible for some negative occurrences in Bali, I can’t stop thinking of it as my own personal light show sometimes. Gotta love Bali rainy season!

Don’t be scared – it’s only water!

So if you have always made it a point to avoid the Bali rainy season in the past, I suggest giving it a try. Bali is a great place to be at any time of year and the rainy season is no exception to the rule. Our newest smartphones are also waterproof which alleviates one of the BIGGEST concerns of the past when driving a motorbike everywhere.

Similarly, if you live in Bali full time and get quite frustrated during the rainy season, just remember that it isn’t all bad. Sure the rain might bring on some undesirable situations, but it dries up eventually. Instead of getting upset, take the time out to note the few advantages the rainy season provides to Bali, and be appreciative of the fact that you are lucky enough to be able to live here at any time of the year.