Bali Land Prices on an Alarming Rise – The Price of Paradise 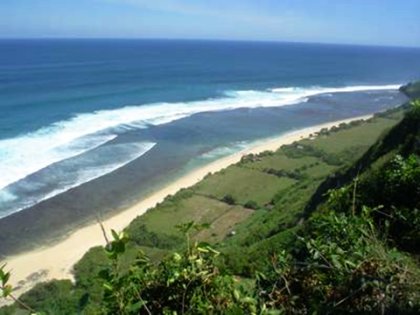 Despite all of the red tape and other things that prevent foreigners from owning land in Bali, there are still thousands of people every year finding a way around it. Some people are buying land as an investment and some are buying to build a house on. Is buying land in Bali really a good idea though? Some recent trends in land prices have many people reconsidering.

As responsible adults, we learn that owning is much more financially responsible than renting. In many cases this is true, but buying in Bali could make an exception to that. I was recently told that buying land in certain parts of Bali was about the same price of buying land in Southern California. It sounded a little bit unbelievable at first, but after doing the math I was very surprised at what I found.

For these calculations we will be using the land around Teuku Umar or Renon which is currently selling for 300 million rupiah per are (100 square meters) as an example.

We will be comparing it against an acre (approximately 4,000 square meters) in Southern California which carries an average price of 1 million USD depending on location.

It is a plausible argument that no one would buy 40 are of land in Bali at the original price for such a large plot as discounts are usually given for larger plots. So why don’t we just take that $379,310.34 off and call it an even million dollars.

Pretty scary stuff. One might say that they would much rather be in Bali than Southern California, even if the land was the same price. I would agree, having made that exact switch myself. On the other hand, buying land in California is a much simpler and safer process, since you will be putting things in your own name and will have much more protection from the government if anything goes wrong.

Of course there is still land available in Bali for much cheaper than 300 million per are, but this is not a good sign of things to come, as this land was selling for under 150 million per are just a couple years ago. I’m afraid to even ask how much land costs around the Kuta/Legian/Seminyak area.

I hope this hasn’t turned anyone away or made them rethink life in paradise. Even if the land is still the same price, building your house on said land will be a fraction of the price of what it would be back home. In this regard, and if you can secure the land under a trusted person’s name with your interests protected by a trusted notary, then buying and building in Bali will still probably be better than renting for decades.

Bali is seeming to be less of an investment opportunity though as far as land sales go. The Balinese will tell you that the price of land has never gone down, only up, even after the bombs that devastated the islands economy. Even if it doesn’t go down again how much higher can it go? It has got to hit its limit somewhere, the only question is when. Those looking to invest should definitely seek out the still lesser developed areas of Bali, or for bigger profit margins, other areas of Indonesia (think East).

I always knew that paradise had its price, I just never believed the price could ever get that high until I saw the actual numbers worked out.