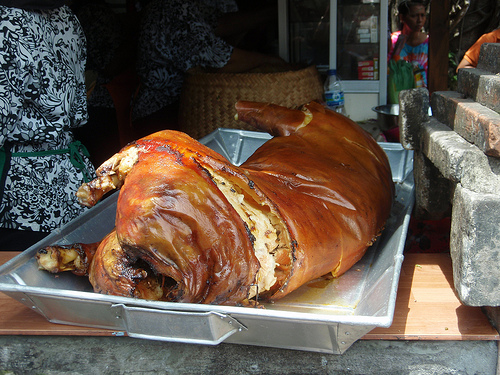 While the traditional “Balinese Menu” is not quite as fleshed out as the cuisine that is found on other islands throughout the archipelago, there is one thing that Bali has that none of the islands have, or do as well.  Babi Guling.  Ask any Balinese what their favorite dish is and chances are a majority of them will answer Babi Guling, which translates to ”suckling pig”.  There are warungs all over Bali serving up Babi Guling, each one being a little bit different, but the most famous is at Warung Ibu Oka in Ubud.

This is of course the one that Anthony Bourdain travelled to Bali just to sample for his TV show.  The warung is located across from the Ubud Palace and as you reach the top of Monkey Forest Road it is right in front of you and easy to get to.  Getting inside and finding a seat can be a whole different story as this place gets packed quickly.  Warung Ibu Oka has no “closing time”, they just shut down when all of the pig meat is gone.  If you want to get some Babi Guling and actually have a spot to sit and eat it, then you better get there early.  Around 10:30 AM it starts to get packed with a mixture of foreign and local tourists and more than likely you will be sat at a short table in the back where you will have to sit in the floor.

So is it good?

Yes! The Babi Guling that is served up at Ibu Oka is very good and tender.  Just like any Babi Guling it comes with a piece of crispy skin, some sausage, tender pieces of meat and little bits and pieces of things that you are better off just eating than trying to figure out what they are.  A plate of it costs rp 30,000 which is a bit steep for Babi Guling which usually goes for anywhere between rp 7,000 and rp 15,000 a plate, but the fame that the restaurant has received and strategic position in the tourist area has allowed them to charge much more.

So is it the best Babi Guling in Bali?

That is a bit of a tricky question to answer, and it will really come down to how adventurous you are in your search for a great Babi Guling.  I have known two warungs to serve up a better Babi Guling than the one at Ibu Oka.  One of them was in Kerobokan and would serve up at least double the meat that you would get at Ibu Oka and was even tastier.  Sadly, I went back there one day to find it closed and was told by the people running the laundry place next door that their contract was up and they had moved but they didn’t know where to.

The second is just into Tabanan Regency and its operating hours are from 4AM to 9AM.  This warung is so hard to find especially in the dead of night and made worse by the fact that it is not marked anywhere as it is down a small alley and located at a person’s house, not in a typical warung setting.  Despite this fact, this warung gets crowded and if you aren’t there at least a half hour before 4AM you can expect to wait up to an hour to be served.  This is the same all week, no difference between Saturday or Tuesday.  This is by far the best Babi Guling in Bali and somewhat of a shame that due to their far location and strange hours that they will never receive the same sort of recognition as Ibu Oka.

So the short answer is, no, Ibu Oka is not the best Babi Guling available in Bali, but yes, it is probably the best Babi Guling that most people will ever get the chance to taste.  Luckily, any old warung on the side of road that serves Babi Guling will be pretty tasty.  Babi Guling is the same as they say about pizza, “even when its bad, it’s still pretty good”.