Anatomy of a Motorbike Accident in Bali 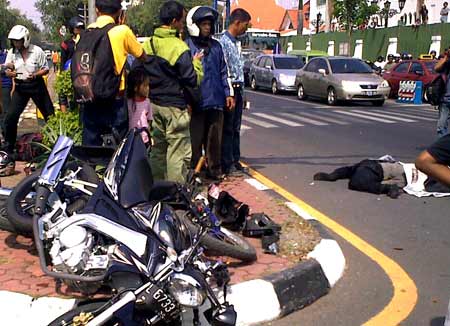 Given the chaos that is Bali roads, it is only natural that accidents can happen. It is amazing that there are not more accidents than there are, given the sheer amount of people and style of driving, but they still do happen and the entire situation is much different than that of a western country. The other day I observed an accident happen and took notice of all of the differences.

Usually, it is a bad idea for a foreigner to stop and have a look at what is going on if they observe an accident, due to many accidents being blamed on the foreigner whether they are at fault or not. For this situation, I was already off my motorbike when the accident took place, so I observed from a distance.

On a back road that runs parallel to the Bypass near Sanur, I had stopped to buy some Es Kelapa Muda (iced young coconut juice) from one of the Kaki Lima (food carts on wheels). After paying and starting to walk back to the motorbike, there was a loud screeching noise in the distance. A young kid on a motorbike had cut off a man who was coming around a bend and the man lost control of his bike. He and his bike hopped up on the curb before he was first flung into a large electric pole and then into a road sign, before falling on top of his motorbike on the sidewalk, motionless.

At this point, everyone in the vicinity ran over to him to check on his condition. I observed from a distance of about 20 meters where my bike was parked, as he already had sufficient help and there was no need to interfere or make myself a target for blame (which can easily happen). This gathering of people was the first difference that was noted, as in most western countries maybe only a handful of people would go over and try to help while the rest observed from a distance as I was. The second difference was that they all tried to move the man themselves, something that we never do at home before the ambulance arrives, so as not to risk further injuring the person by picking them up in the wrong way.

Also, noted was the fact that there were no police called to the scene of the accident. Most Indonesians do not see police in the same way that we do, and they surely felt that the police would do nothing to help the situation except maybe ask for money and try to stop traffic, which was already doing a pretty good job at backing itself up. Also since HIV/AIDS, while prevalent in Indonesia is still not to the point where they have adapted the line of thinking of “treat everyone as they have HIV” when dealing with or caring for a bleeding person, people touched the bleeding victim without gloves.

The man was obviously from the area because in less than five minutes his wife was running up the street crying. In Bali, a trip to the hospital in an ambulance is expensive and due to the traffic it can take a long time for an ambulance to arrive to the scene, thus rarely used by locals when an accident happens. A small construction project was going on in the area that the accident took place in, and the workers (still in their hard hats) drove up and the crowd helped to lift the man into the back of the truck and after his wife and a couple others jumped into the back, they sped off to a hospital.

I was approached during the time that the crowd was still forming by a single man holding a decent sized bag of food, who invited me for a bit of small talk about the situation before asking me for some money. I said I didn’t have any and he continued talking a bit more before asking for money again. When I asked if he was related to or even knew the man who had fallen, he got nervous and fidgety and didn’t answer. After the man was lifted into the truck and driven away he tried one more time to ask for money, which just proved that the money would be for him and not for the victim. It was at that point that I told him in a nice mixture of Bahasa Indonesia and Bahasa Bali, how pitiful it is that he is trying to take advantage of someone’s misfortune like that. He seemed like he got the point because he walked away with his head down.

Hopefully the man made it to the hospital and was treated promptly and the medical bills were not too much of a burden on the family. This story was in no way trying to criticize the way that Indonesians handle situations, rather to realize the differences in our cultures and the way we handle things. Also to drive the point home that as a foreigner, you really have no place to interfere when a situation like this arises, as our ideas on handling the situation will be so vastly different that we can easily become a nuisance, and be open to scams like the one mentioned above. Just remember to drive safely on the roads and be aware and with a bit of luck you may not ever need to see a sad situation like this one.