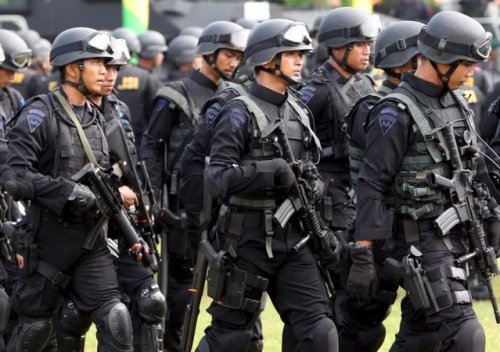 The first 3 out of the 5 were apprehended in a raid on Jl. Danau Poso in Sanur, an area famous for its red light district. What these suspected terrorists were doing in this area when the raid took place shouldn’t take anyone more than one or two guesses. Residents of the area reported hearing gun shots around 10 PM.

The remaining 2 men were apprehended in Denpasar on Jl. Gunung Soputan, a central area of the city off of Jl. Imam Bonjol. It has been reported that all of the men were armed at the time of the raid and that firearms, ammunition and facemasks were confiscated once the scene was clear.

According to reports, the men had been in Bali since February and were the same men who carried out the 2010 CIMB Niaga bank robbery in Medan. During their time in Bali it was reported that all suspects were under surveillance by police and were observed surveying a gold store in Uluwatu as well as a money changer and café. Police believe that the men were planning to carry out these robberies to fund future terrorist activities.

While no one enjoys hearing news like this, we do have to tip our hats off to the Elite Densus 88 Anti-Terrorism Squad who were responsible for eradicating all 5 armed terrorists without any civilian casualties. All of this comes just 5 days before the annual Balinese holiday, Nyepi Day, where all people on the island will be required to stay inside for 24 hours, leaving the streets empty.