Uber in Bali? Try Grab and Gojek Instead! 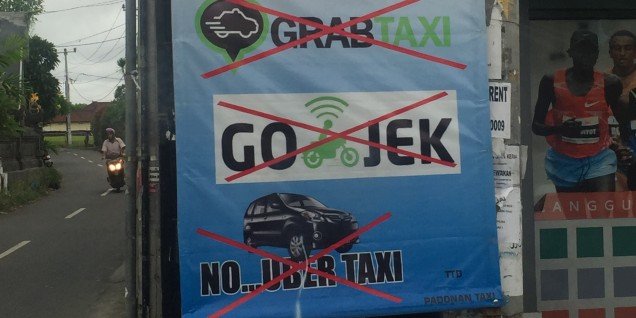 Is Uber Available in Bali?

Uber itself is NOT available in Bali, no.

In 2018, Uber announced that it has sold its Southeast Asia-based business to Singapore-based rival, Grab.

Grab bought Uber’s ride-sharing business in eight countries in Southeast Asia. It also took over Uber Eats and expanded that operation throughout the region.

In exchange, Uber received a 27.5 percent stake in Singapore-based Grab.

“The deal starts to make sense when you consider that both companies share common investors — SoftBank and Didi — and that waging an expensive subsidies war in what is currently a loss-making hurts both sides.” according to Tech Crunch.

So, yes, Uber is available, but under the Grab flag. The good news is that Grab is a great company with great service, packaged in an easy user interface and you can do anything you could do with Uber… and then some!

The Taxi Wars in Indonesia

Only a few months after beginning operations in Bali, Uber, Grab and Gojek have become a target of anger from the local “transport community”. Angry Bali taxi drivers protested against Uber and Grab, prompting the provincial government of Bali to ban them.

This decision was later reversed, thanks to the power of money, but the animosity remains strong. One can easily understand frustration in the midst of added competition in an already oversaturated transportation market. And, the unbeatable convenience and very low set prices are nearly impossible for legit taxis to compete with.

All of which conspired to break the monopoly held by Indonesia’s powerful taxi conglomerate, Bluebird Taxi.

While many of us have a perfectly normal experience in a conventional Bali taxi, most of us have also have had very irritating, if not downright scary experiences.

When you flag a taxi from the street, regardless of what company, the drivers all too frequently try to set a fixed price that has nothing to do with the meter. What frustrates most of us is that the price given is ridiculously high and we have yet another part of our day that needs to be tirelessly negotiated.

Online taxis like Grab and Gojek are so much easier. Just pull them up on your phone and go! In theory anyway…

A simple app-based service that allows customers to book transportation without worrying about pretty much, well, anything:

Note everything is perfect when using online taxis. The main issue that you will run into sometimes is a general lack of professionalism. The online taxi drivers here might not have the level of driving experience and general knowledge that you would find with a taxi driver.

Online taxi drivers are often just working a second job. They may have just recently learned to drive and are renting the car from a friend. It’s also common to find that the person picking you up is not the person pictured in the account. That’s not a big deal, but it can make for a frustrating experience when the driver has no idea where they’re going and needs a lot of extra direction.

I’ve had some very nerve-wracking experiences riding in a Grab or Gojek in Bali!

Falling in Love with Taxis Again

After using these taxi apps for so long, now when I step into a taxi it can feel like a luxury. A professional driver with a strong working knowledge of the area? Wow! I’m not used to it.

But to have a good experience, you need to make of a couple things.

Taxis here, at least Bluebird, should ALWAYS be using a meter. Personally, I order my Bluebird via their call center and to date have never had an issue with the driver not wanting to use the meter.

(Note: tampered meters are also known to exist, as are evasive and roundabout routes to increase the fare on metered rides.)

Use a proper, brand-name taxi. Beware the off-brand. Especially at night if you’re drinking. Take a Bluebird and ignore anything else!

The reaction by the existing “transportation communities” to services like Uber, GrabTaxi, and even GoJek has not been positive.

Way before any of those services came to market I noticed a sign in my neighborhood and many others that stated ‘Taxi Drop Only.’

This meant you could only take a taxi to your home. If you wanted to go somewhere from your home, the local “transport group or community” expected you to use their service, and would not let an empty taxi enter their streets for a pickup.

Not so ironically enough, that transport group was run by the local banjar. All in an attempt to monopolize the

needs in the area. I couldn’t help but laughing when their sign went up with the name ’PCP Transport.’

Whatever the reason they chose that name, I always wanted to get in a car driven by someone on PCP. (PCP is a hallucinogenic drug 🙂 )

So, now you know why I write these so-called “communities” in between quotation marks.

Are these online taxis good for the local people?

Now, with more competition to both the local transport monopolies AND taxis those ‘Taxi Drop Only’ signs are changing to include ‘NO Uber, NO GrabTaxi, NO Gojek, NO GrabBike, DO NOT ENTER.’ It’s pretty crazy actually.

Even crazier to think that nothing, nothing at all, is preventing those drivers from registering as a driver with any of the aforementioned app-based transport services.

Perhaps with more work coming in those drivers wouldn’t feel so hungry for business.

If you only get one job in a day it should be enough for you to make your living, right? But what if you get 10 jobs in a day? Maybe you will charge a fair market price and make even more than you expected for actually working. Who knows?

Here are some tips if you plan on doing the same:

Have fun in Bali and be careful!