Where are All of the Balinese People in Bali? 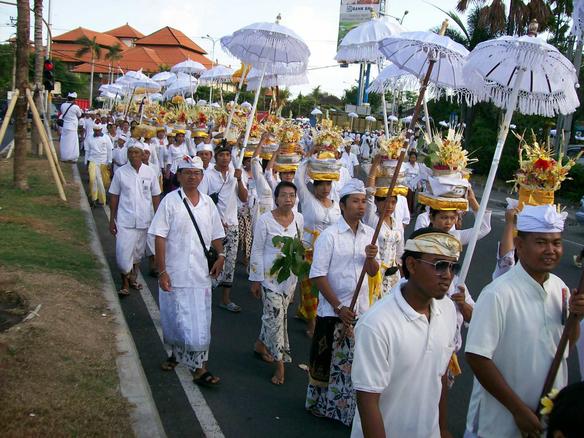 As traffic grows more congested and the air and level of noise becomes more polluted, people are often asking themselves why they come to Bali in the first place. For many people the answer is simple, the people and their culture. The Balinese people have probably been the most instrumental thing in making the island the tourist attraction that it has become. That is why some people are so confused as why they don’t seem to really cross paths with many Balinese while out and about during their stay in Bali.

I’m going to relay an example of an experience that has happened all too many times here in Bali. Usually I will be with a friend who is Balinese and will be introduced to a foreigner who is traveling in Bali. They will meet my friend and the conversation, after asking their name usually goes something like this:

Traveler: So where are you from?

Traveler: OH WOW! I finally actually met a person who is actually from Bali!

Balinese friend: How long have you been here in Bali for?

Traveler: Around two weeks, I really love it here!

Balinese friend: (with a puzzled look) You have been here for two weeks and I’m the first Balinese person you have met?

Traveler: Well, the staff at my hotel and some of the restaurants I have been to might have been, but you are the first Balinese person I have met in a social setting.

Before going any further, let me clarify that this article is not meant to talk bad about foreigners, travelers or Balinese. Just as an observation of how people can spend so long in Bali sometimes without interacting with the Balinese themselves (outside of business establishments of course). There might be a couple of generalizations in here, but I made sure to confirm these lines of thinking with several Balinese before writing the article.

One of the things that makes Bali and Indonesia unique to almost anywhere else in the world is the amount of different ethnic groups all located in one country. These days the south of Bali has huge populations from all of the other islands in Indonesia. Going into certain areas of Denpasar some Balinese even feel like they aren’t even on their home island anymore due to the different architecture, languages being used and types of things being sold. That is Indonesia though. Bhinneka Tunggal Ika (Unity in Diversity).

The effect that carries over into the tourism industry can be quite interesting though. Many people say that one of the things that they love about Indonesia is the fact that the people are very willing to hang out with you as a foreigner. This is compared to a lot of people’s experiences in places like Thailand where they report that the foreigners all hang out in their own groups and so do the locals. So with all of these friendly locals ready to hang out, chat on the beach or share a drink, how come so many people can go so long without ever meeting someone from the Balinese community? The answer really has two separate sides to it.

Many travelers and even some expats hardly ever get out of the main area of Kuta, Legian or Seminyak. South Bali and these areas especially are the most highly concentrated and most highly mixed with Indonesians from other islands. The majority of the Balinese there, unless they were born and raised and still have homes in the area are mainly there for work. The Indonesians from Java, Lombok and other islands might also be there for work but will be more likely to have a small apartment in the area meaning the area is much more accessible to them for nightlife and hanging out. Also, the young Balinese of this generation have grown up knowing that foreigners have been coming to their island by the plane load since before they were born. Seeing and hanging out with a tourist or expat isn’t always as exciting as it might be to someone who may be from a place elsewhere in Indonesia that rarely gets foreign visitors. Of course the Balinese still enjoy the company of their foreign friends, but it is an option they have had for their whole lives, unlike a “local expat” who has only just started to experience this in Bali.

Also, some of the activities and night life that the foreigners like to get themselves into like drinking at a club or a bar, makes it easy to find yourself surrounded by the types of people that you wouldn’t want to see behaving in such a way in your own home town.

The sentiment can be largely the same for the average Balinese. Things like crazy, drunken foreign teenagers, money-hungry, Bule-hunting prostitutes and other things that come in the bar/club environment are not really a part of the average Balinese person’s comfort zone.

This is not to say that this is only the choices that are made by the foreigners that have created a bit of a separation. Naturally, it being their home island the Balinese have many more personal and family responsibilities that need to be carried out compared to other Indonesians living in Bali. With all of the ceremonies that are carried out on a regular basis, sometimes starting very early in the morning, the Balinese often spend their nights with friends and family around their home area. Also for many young Balinese they often feel much more comfortable surrounded by a group of close friends in a familiar environment compared to the party scene which includes all sorts unsavory characters.

Part of that is due to the fact that Bali is very small and the Balinese community is a very small minority in the grand scheme of things in Indonesia. Nowhere else have I seen such a strong immediate connection that can exist between two strangers just because they are from the same place or ethnic group.

In Bali, reputations mean everything because on such a small island things travel fast and people are not quick to make a bad reputation on their own island. This leads to Balinese being very trusting of each other and a bit hesitant (although not unwilling) with a stranger from another area. Their culture has remain intact to this day by the things that bond them all together and it really is beautiful.

Have you ever noticed this phenomenon for yourself?

If you are a frequent traveler to Bali or an expat but find yourself without too many Balinese contacts then it might be time to make a few great ones. Or if you already have many great Balinese friends but come across a tourist who seems shocked to finally meet an “actual” Balinese person then maybe introduce them to some of yours.

Any Babi Guling warung, ceremony or any place off the beaten path really could be a great place to make new friends. With all the great and friendly citizens of Bali, we all owe it to ourselves to spend more time getting to know them while we are here.